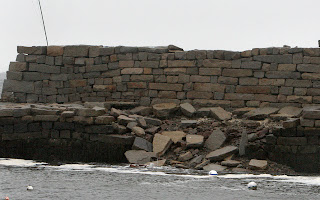 ‘Fighting a losing battle with the sea’ - Boston.com: "The Elsmores’ basement filled with 5 feet of water, and flames billowed into the dark sky from two nearby houses that flooded and caught fire. Their neighbors’ young children had to be evacuated from their house by a bucket loader. In all, some 400 homes were swamped.

The ocean’s fury is an omnipresent threat for the growing number of people who live at its edge. But accumulating scientific evidence suggests that our warming climate could cause sea levels to rise faster than previously thought, making storm surges like the one that pummeled Scituate more dangerous."
at 4:52 AM