Monbiot.com � Looking for Trouble: "Forget, for a moment, the fragility of the Arctic environment and the likely consequences of a spill there. Forget the dangers of deepwater drilling in a strait plagued by storms and icebergs, and the difficulties –greater than in the Gulf of Mexico - of capping a leaking well there. There’s an even bigger question raised by a British company’s discovery of oil off the coast of Greenland(1). It’s the same question that’s invoked by the decision the British government is expected to make today (Tuesday): to allow exploration wells to be drilled in deep waters to the west of the Shetland islands(2). Why the heck are we prospecting for new oil anyway?

It’s not a difficult issue to grasp. If we burn just 60% of current global reserves of fossil fuels, we produce two degrees of warming(3). We cannot afford to use what has already been discovered, let alone to find more."
at 10:09 PM No comments:

Global Economic Crisis � Iraq War Will Cost the American Economy $3 Trillion: "In 2008, two distinguished academicians, Nobel Prize winning economist� Joseph Stiglitz� and his colleague, Linda Bilmes from Harvard University, published the most comprehensive analysis of the actual cost, current and future, of America’s Iraqi adventure. Their conclusion, published in 2008, was that the ultimate expenditures of the American taxpayers due to the Iraq war and its aftermath will be at least $3 trillion. They labeled their study, quite appropriately, “The Three Trillion Dollar War.”"
at 9:01 PM No comments:

Are humans smarter than yeast? 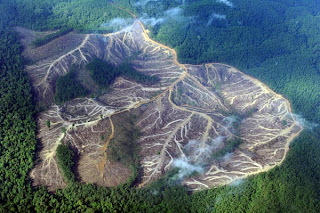 This photograph made available on August 19 and taken on August 5, 2010 during an aerial survey organized by environment group Greenpeace, shows a logged over area in the vast track of pulp wood concession operating in the mountains of Jambi province in Indonesia's Sumatra island. Norway agreed on August 19

Disasters show 'screaming' need for action - climate chief: "GENEVA - UN climate chief Christiana Figueres on Thursday warned that a string of weather calamities showed the deepening urgency to forge a breakthrough deal on global warming this year.
Speaking before some 40 countries were to address finance, an issue that has helped hamstring UN climate talks, Figueres said floods in Pakistan, fires in Russia and other weather disasters had been a shocking wakeup call."
at 10:06 AM No comments: