Amtrak’s current subsidies pale in comparison to the nation’s highway system, Dukakis points out. Highways in America get over $40 billion dollars in federal funding every year; air transportation gets about $16 billion. Amtrak’s funding is down to a few hundred million dollars."
at 6:54 PM No comments:

Email ThisBlogThis!Share to TwitterShare to FacebookShare to Pinterest
Labels: #subsidy 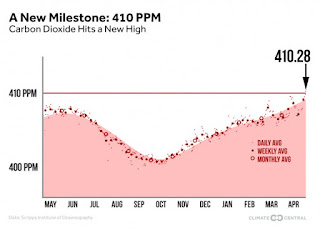 Climate Central : "On Tuesday, the Mauna Loa Observatory recorded its first-ever carbon dioxide reading in excess of 410 parts per million (it was 410.28 ppm in case you want the full deal). Carbon dioxide hasn’t reached that height in millions of years. It’s a new atmosphere that humanity will have to contend with, one that’s trapping more heat and causing the climate to change at a quickening rate."
at 6:27 PM No comments:

Yankee Institute : "In 2016, the national transportation research organization reported 44 percent of the state’s major roads are in poor condition and 34 percent of the bridges are in need of major repair or replacement.
A 2016 study by the Reason Foundation found that Connecticut ranked 47th in the nation in terms of cost effectiveness for its transportation spending. Connecticut has spent a total of $477,875 per mile of road in the state."
at 4:04 PM No comments:

reformer : ""Sometimes, the road is closed," she said. "Sometimes, it's very slow going. Our buses don't have difficulty getting over the mountain. But often, other cars or tractor trailers are in the way.""
at 11:53 PM No comments: