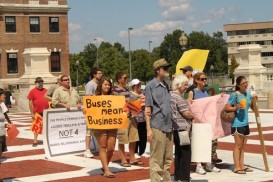 State asks people to go car-free from Sept. 18-24 - Brockton, MA - The Enterprise: "The governor is asking residents to leave their cars in the driveway and try bicycling, walking, public transit, carpooling, or vanpooling, for Massachusetts Car-Free Week, Sept. 18-24. Massachusetts will join more than 1,000 cities in 40 countries to show the benefits of reducing the number of vehicles on the road."

Science-fiction writers, put down your pens

You can't make this stuff up. In the news -- in Pakistan last year, four million people displaced by flood. Today, a suspected big brother drone strike allegedly killed three presumably suspected-terrorists in that same country. So, to sum up, climate change is ravaging a poor country, and big brother, who caused the climate change, is bombing it with robots because it lacks democracy. If democracy is restored, then Pakistan can vote to help with the goal of creating more climate change. If you wrote this in your book, it would not sell. Good science fiction must have plausibility within its frame. And, that "suspected" drone strike--so hard for big brother's military to keep track. Oh, yes, one more thing. A major political party for big brother is saying that the floods are not even happening.
at 5:09 PM No comments: